New Year is one of those funny occasions as parents – you feel like you should be doing something but in reality you have nowhere to go and the chances of getting a baby sitter are slim at best.

‘Let’s do something different’ we thought.

My aunt and uncle live in Barcelona. They have often suggested we stay – why not take them up on their offer?!? I’ve been loads but this would be the first trip with the children.

We flew in (from Stansted) late afternoon on New Years Eve (it’s worth noting that Barcelona Airport has epic play parks!). We hopped in a taxi (look for yellow and black cars – they’re all over the city). If you’d rather take public transport, you could hop on the airport bus or take the train and metro from just over the road.

I was worried that things would be closed (as in the U.K. on New Years Eve). The reality was that all the little supermarkets were open until at least 7pm – most until 11pm. Restaurants and bars were open but I gather you’d need to book in advance for the popular choices. The main fireworks are held at the Magic Fountain near Plaça d’Espanya.

We chose (well ok so not technically a choice!!) to stay in and my aunt and uncle had kindly left us a gorgeous hamper of goodies. 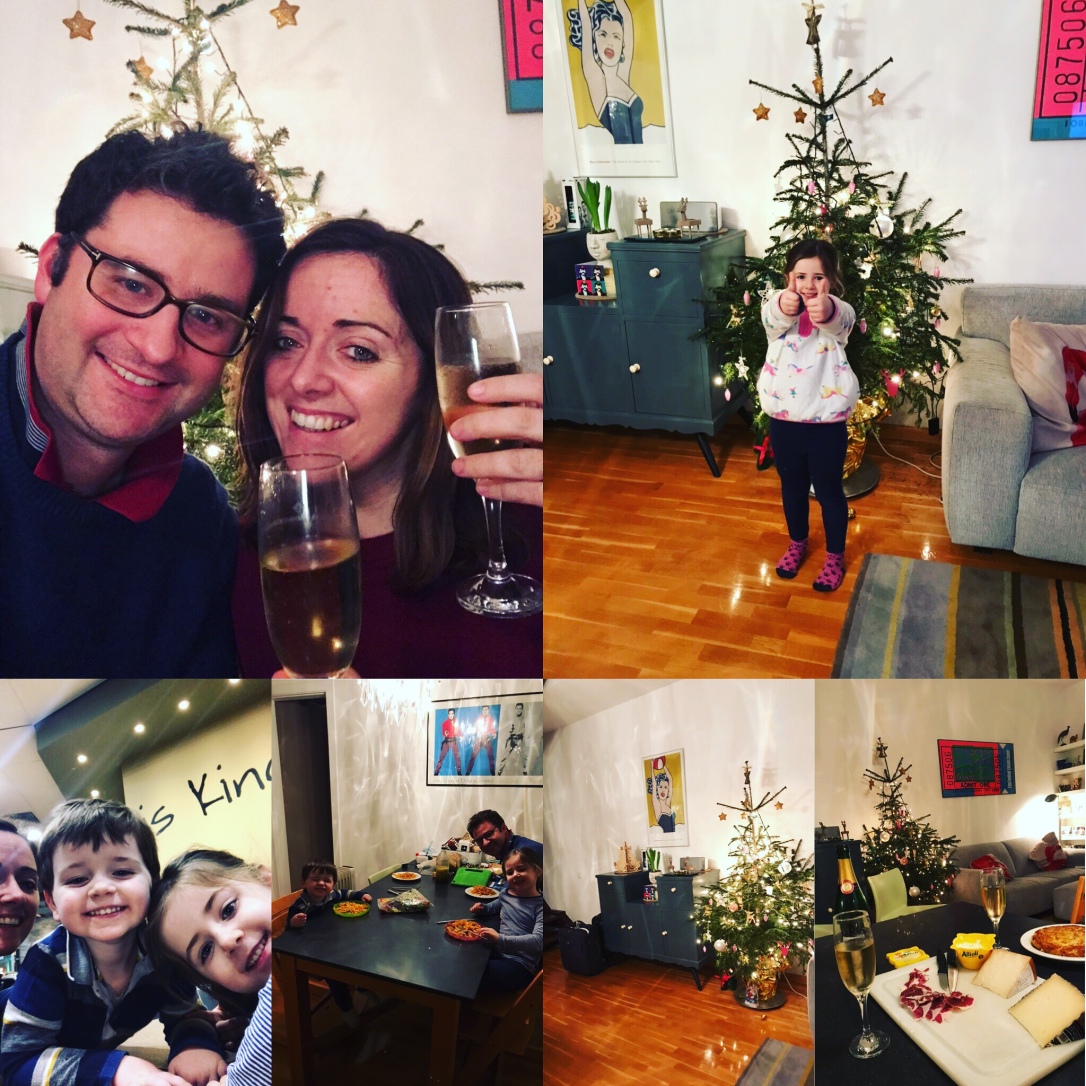 What’s more perfect than a walk along the beach after a slightly heavy night?!? We grabbed some yummy croissants from on Carrer Bailen (in Gracia where we were staying) before jumping in a taxi to take the short ride through a sleepy city to El Peix, a 52m long golden fish sculpture on Barcelona’s seafront – ask to be dropped at Barcelona Casino. We found a nice bench overlooking the boats and had our second breakfast (a major perk of parenting!) The morning was spent playing on the beach (it was a balmy 17 degrees!). 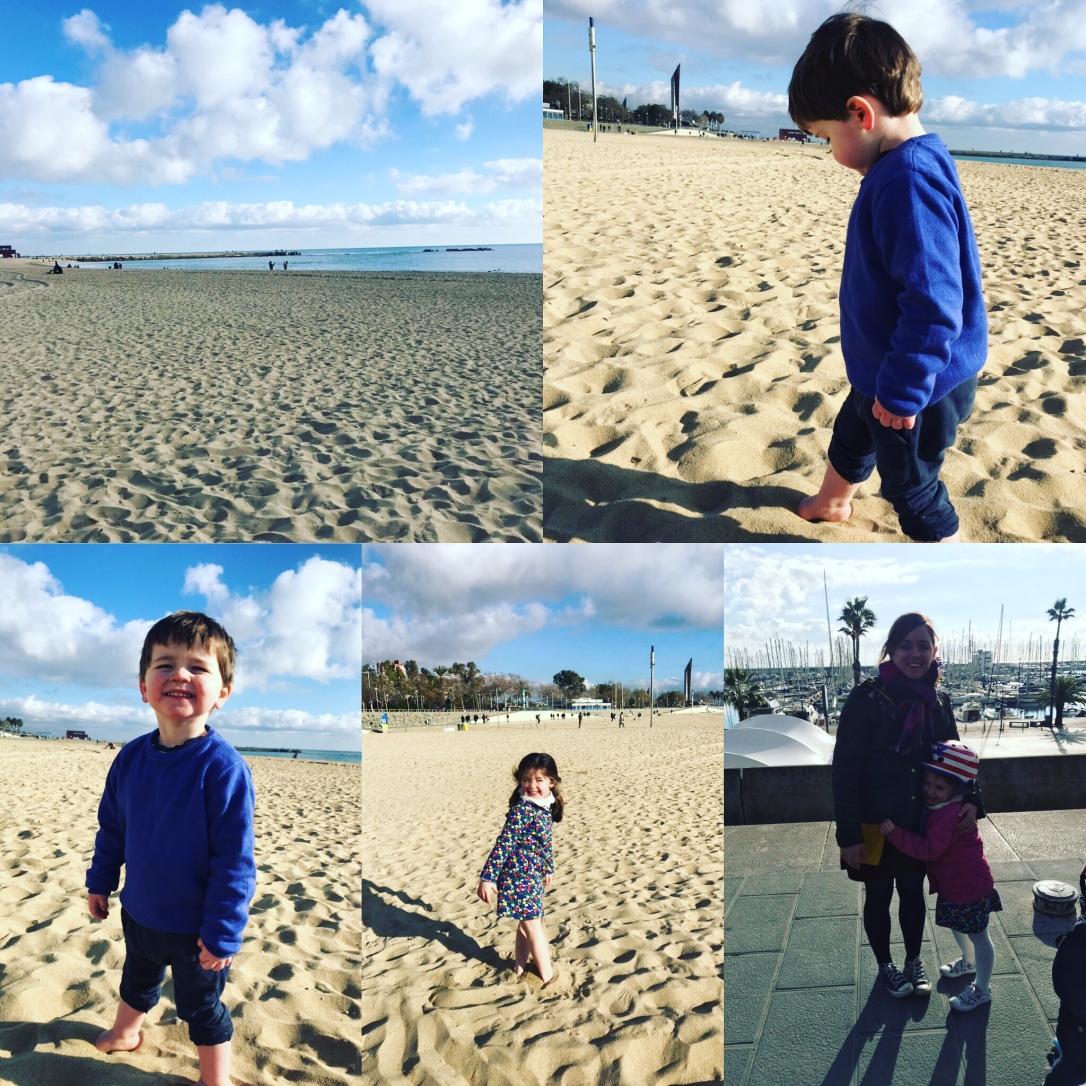 We stopped for lunch at one of the numerous restaurants overlooking the beach (on Moll de Gregal) before heading to Parc de la Nova Icària, (08005 Barcelona – it’s between the Macdonalds a the casino, to have a play in a number of play parks (it’s an easy 5 min walk from the beach, also very scooter friendly!).

After a play we made our way back up to the apartment for an afternoon snooze for our youngest. After a brief siesta we hit one of the numerous play grounds in the Gracia (highly recommend this family friendly district) before whiling away an evening eating delicious tapas in Plaça de la Vila, (known as Plaça del Rellotge because of the large clock tower in the middle). A wonderful start to a new year.

A trip to Barcelona really wouldn’t be complete without a trip to this wonderful landmark. I recall spending many a Sunday here with my cousins over the years. Things have changed a bit in the intervening years. Gone are the days of free entry and you now need to book in advance to secure the time of your choice (booking is only required for the key Guadi landmarks the rest of the park is still accessible). Children under 6 are free. Note that it’s not very pram friendly. There is an accessible route but you’ll need to ask for the map. Even that route wasn’t that easy to navigate and still involved plenty of steps.

It’s also worth giving some thought to how you’ll get to the park. It’s a bit of a pull up a hill (especially with a pram and little people in tow!). May be worth grabbing a taxi right to the entrance. Pack a picnic – there is basically nothing up there.

We didn’t hang around for long. The children found it very difficult. They couldn’t run freely etc. So, after an hour or so admiring (or dragging the children around!) the colourful art work we hit the public park (cue another play park!) and a picnic lunch.

**Top Tip – print of some Guadi colouring sheets etc before going. It is one of the least child friendly ‘museums’ that we’ve been to.

We kicked off this day with a not to be missed Spanish treat (churros!!!). There are plenty of places across Barcelona. We hit the now famous La Nena. 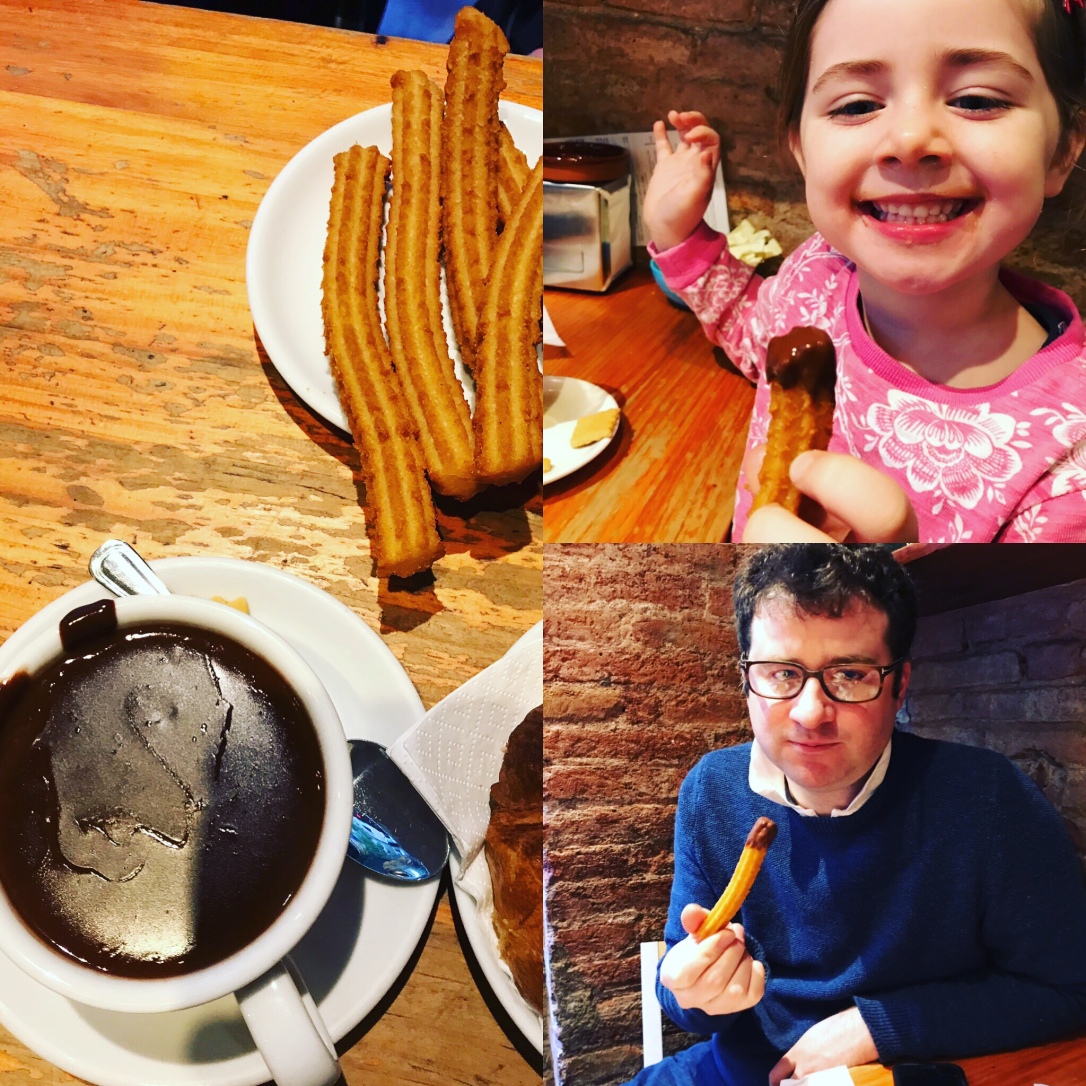 Re-charged we embarked on a day of sight seeing – starting with a leisurely stroll down Passeig de Gracia (admiring some more Guadi architecture on route). We then enjoyed a stroll down Las Ramblas, picking up lunch in La Bocoquera market on route (yummy Jamon, bread and Manchego Cheese). We continued down Las Ramblas, posing for photographs on the lions on the Columbus statue…a few play parks later (on Passeig de Colom) and we stopped for a picnic lunch looking at yet more priceless boats down by the Marina. From here we had hoped to head to the Eyescream ice cream parlour (they make faces out of ice cream. Who doesn’t need one of these) but sadly it was shut for the winter season (we’ll have to come back in warmer climes!). From here we strolled (or scooted) along the beach promenade to the beach, stopping only for an ice cream at the Farggi Barceloneta shop (another Barcelona institute!). What was left of the afternoon was spent enjoying the beach, this time at Platja del Somorrostro (Quieter and has some lovely beach side bars and restaurants).

If you’re looking to go inside the Sagrada Familia you’d need to book. We weren’t keen with the children. We opted instead for a scoot down Passeig de Sant Joan, stopping at the endless play parks (you could also grab some picnic bits at the Abaceria Central Market) and then ended by admiring the architectural masterpiece from yet another play park at the foot of the church. We ended our holiday with yet another tapas (it really is the ideal food for families in the city – available for most of the day which means the timings of meals don’t have to alter and children can try new flavours without the pressure of eating a whole dish!). 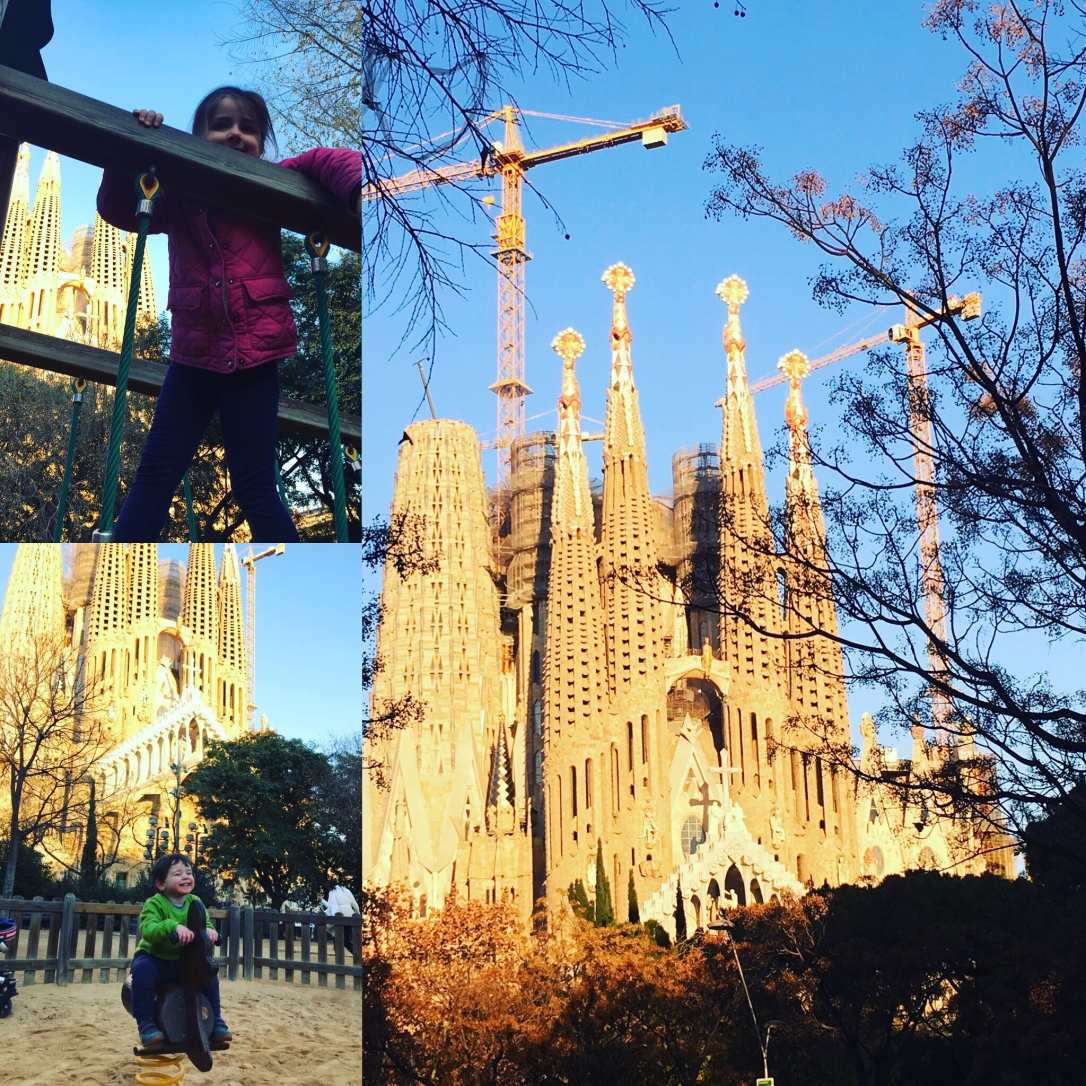 A wonderful family break. Perhaps this will become a annual tradition?!?

View all posts by mummyandmeonholiday

A wonderful #lockdown afternoon birthday tea courtesy of our local cake shop @orangemabel. We even dressed up. What a treat. Homemade chocolate cake and a FaceTime with mum and dad. A wonderful birthday. #lockdownbirthday #familytime #weekendvibes
Hola! Theme Friday here again! This week was #mexican day. We learnt about chocolate (any excuse!), read Spanish stories, and made cactus plants from @whogivesacraptp toilet rolls! The children ran a Mexican restaurant and we were charged for dinner - chilli con carne (in other words numeracy happened!). We’ve danced away to fiesta music and generally had a great day! #homeschool #covid19 #familytime
This is me right now....doing my best. Putting my children and their happiness first, supporting my husband, a doctor on the front line, and keeping myself happy. Keep inside everyone. This is far from over. #uklockdown #workingmum #academia #wifeofadoctor #nhs #covid19
Friday has been dedicated theme day in our house. Week one of isolation saw #indiatheme we’ve danced to Bollywood music, we’ve watched clips from Bollywood films, we’ve watched elephants and tigers live @chesterzoo, we’ve learnt about the flag, we’ve designed henna hands taking inspiration from colouring #saris, we’ve done adding up with an elephant colouring sheet and we’ve had bread sticks and mango chutney! A fab day and can’t wait for our evening curry! #themedayfriday #homeschooling #isolation #uklockdown #covid19
A busy few days of home schooling here. It’s actually remarkably fun (well so far!). Ask me again in 12 weeks!!! #covid_19 #covıd19 #uklockdown #stayhome #socialdistancing #familytime
My new #socialdistancing sign #covıd19 I am frustrated by the number of people I see out and about. Please everyone take notice of the advise. Stay in, shop once a week and then only for the things you need, avoid play parks, enjoy the garden, don’t socialise with friends or family #helpthenhs #stayhome